Bo’az (who goes by Bo for short) is a dwarf who hails from Shadowdale. He is a Rogue Artificer from a proud clan of metalworkers and engineers. He is currently on a personal quest to retrieve lost dwarven engineering secrets from the ruins of Phlan. Until he completes the quest, Bo refuses to use his clan name. So far things have not gone as expected, and his delving has only led to a suit of magical, padded leather armor.

He met up with an adventuring party in a most unexpected way:

“Bo looked around to make sure he wasn’t being watched, although in his current state of exhaustion there could be someone standing directly behind him and he might not know it. The dwarf slid out his picks and made quick work of the lock on the door. He needed a safe place to rest, but no place was safe out here. Unnoticed behind a locked door, he should be able to sleep. His sanity depended on it.

“Inside the abandoned outpost, he chewed on some jerky. It had been ages since he had tasted decent food. Longer since decent ale. He had pouches and sacks full of tools, equipment, and geegaws. However he had yet to find anything of actual value. The surrounds were tough alone, especially for a dwarf. If he could just find the old Dwarven implements he knew to be hidden in the ruins, the trip would turn profitable.

“He needed something to show for the loss of most of his funds, much of his hair, and the better part of his pride. It would happen. There would be a breakthrough shortly. After he slept. Everything would be better after he slept.﻿

“He never saw the orcs who were tailing him from a distance.”

Age: 63 Weight: 156 Height: 4’6" Sex: M Hair: Brown* Eyes: Slate Level: 2
Alignment: CG Homeland: Shadowdale Religion: Gond (Clangeddin)
*His hair and beard are short, looking like it has been singed off in the recent past. 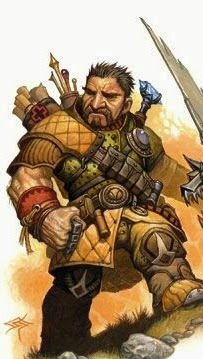