A dark and sinister fey Waterdhavian draped in crimson, midnight and venom. Obsessed with the occult, he found purchase as a mercenary, warring across the outer-planes, studying and slaying the Fiends.

Note: 5 points of Willpower have been lost to Fiend Slayer leveling.

__His introduction to the occult came one autumn morning, hunting birds in fells outside of the city he was beckoned into a dark hallow by a strangely plumed grouse. Following the magnificent fowl, he encountered the Night Witch Grimmelstül, taking a fair glamour—who seeking a drop of elf’s blood for her spell—fed him sweets, and pricked his finger. " Greetings supple elfling, why do you chance upon my thatch-ed hut? Do you enjoy elven-sweets, child? Come step into my parlor…"

Following the encounter, Grimmelstül took an interest in the boy, gazing upon him from her foul n’ frothy scrying pool. On many a night, the crone would haunt his dreams, as hags are want to do, wherein she would ride upon his back all night; eat his ears, nose, and fingers; smash his favorite toys, and such. Often, he’d wake screaming, and run for mommy’s bedchamber.

Finally, Eöl’s fair and wholesome Mother had had enough of his bed-wetting and night terrors. A goodly and somewhat accomplished sorceress in her own right, would not let such a vexation disturb her domestic tranquility. So, the Maven and her knitting circle, after enjoying a well-mannered brunch, followed by their mid-morning tea, rode swiftly to the fells and rooted out the old crone. Restraining the hag was easy. Then, the real fun began. First, they set about bathing, delousing, then shearing ‘Pussface’, her taciturn hell-cat familiar. Once onto her abode, they quickly got to work dusting, scrubbing, and varnishing, putting out new linens, drapes, and so on: A top to bottom, full-on, complementary redecorating! Forcing Grimmelstul to sit and watch her dank, dark, and very vile hovel be turned into a cozy cabin, fit for a charming maiden, was a cheerful exercise. As they beautified and sanctified her abode, they beatified her too. All while giving the Hag the full Waterdhavian spa-treatment; pedicure, manicure, sugar-scrub exfoliation, a very luxurious ‘make-over’, on the spot. While all very satisfying, the day was getting long, and Lady Darkfriend and her bridge-club were expected to be home and preparing dinner for their husbands quite soon. Finally, after changing the locks, and giving the door keys of her rehabbed hut to a family of émigré Brownies, they burnt the old crone and her familiars at the stake and were home in time to take the goose out of the oven.

What Lady Darkfriend didn’t realize though, was that Grimmelstul had her own child… Watching from the dark nook below an overlarge tree root, as the socialite elven housewives destroyed its home, the child swore an oath of vengeance upon Lady Darkfriend. The child swore to take from her—this comely white witch—what she loved most dearly. The object of that hateful vengeance would be Eöl.

Like many young, naive home-bound Waterdhavians, he lusted after the legendary Pool of Radiance, a fancy in-vogue at the time. And hence young Eöl spent studying The Moonsea region, and its ancient history; moreover, he picked up both Tharian and Auld Tharian. It was just a ‘passing phase’, as they say.

Later, sometime during his adolescence, near the midpoint of his wizardly apprenticeship, came the decisive happenstance of his young elfin life, he stumbled across a book of fiendish lore. Hexes, summonings, true-names, pits and chains, horns and fangs and barb’ed tongues and tails…It was all completely intoxicating. This led him down a dark path, a deep dive of further study, gobbling up every bit of hellish occult science, myth and fable he could find…When his overly protective mother wasn’t hovering about, of course. Many nights he spent by candlelight, sneakily lucubrating over the illicit publications. All things dark, hidden and forbidden fascinated him.

Finally, when his fascination got the better of him, he paid an archmage to gate him to Sigil. Driven by his obsession with the lower netherworld, and its fiendish inhabitants, he spent his last coin getting off the Prime. Driven by a need for funds, and his own interests, he became an errand runner, spell-caster, sword-swinger, and ‘Hades-expert’ for hire. Jumping at any opportunity allowing him to delve deeper into the diabolical, he found himself often on the lower rim of the Outlands.

In time, he joined a Yugoloth company reaving the lower planes; selling their services for stingers and jink; warring with Tanar’ri, Baatezu, and worse in that interminable planar conflict: The Blood War. It was in the aftermath of one such episode in this unending line of rangings, skirmishes, and battles that he came upon a witch picking over the dead. The elfling took her for a hag and the Priestess swiftly corrected him. Seeking relief, comfort, and consolation from his continued nightmares, and having a lust for secret things, Eöl turned to the veneration of Shar: the two-faced goddess. The Priestess, one Darya of Shar, has since served as the elf’s chaplain and confessor.

Since his conversion, he has warred with the Yugoloth hosts for one-and-sixty years; the lion’s share of this time, he’s served as a subaltern in a Yugoloth mercenary company. One at least one occasion, his superiors have made good use of his hatred of hags to settle accounts with these other denizens of the Gray Wastes. 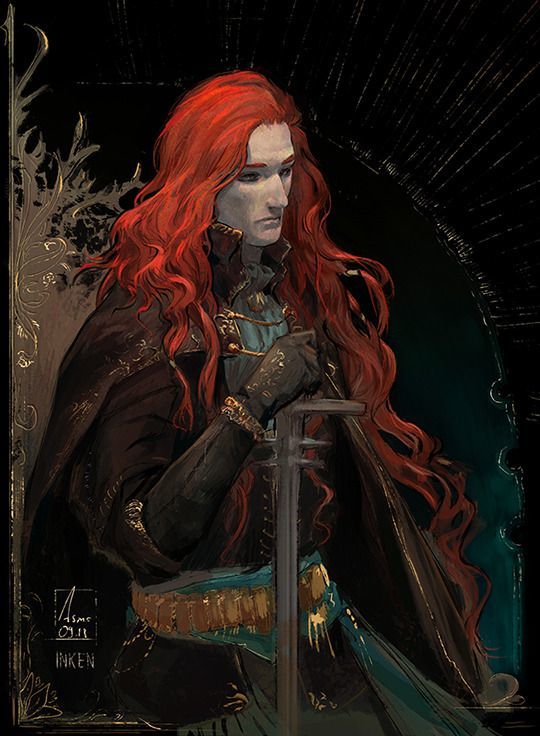