A freed or fugitive slave starts with a +4 bonus to all saving throws vs. wizard spells from the enchantment/charm school and priest spells from the Charm sphere. If placed under any form of charm spell, a slave warrior makes new saving throws against the spell as if his Intellgence was 3 points higher, shortening the time between checks. He gains his +4 bonus vs. enchantment/charm spells on new rolls.
From his years of grueling enslavement, work, punishment, and training, a slave warrior has a better chance to resist pain and stress. He gains a +3 bonus to his starting Health and Stamina scores.
Once per day, a slave warrior may summon all his willpower and channel it into a sudden burst of energy that raises his Muscle score by 3 points for as many rounds as he has levels. This may occur during combat, when attempting to bend bars or lift gates, or under any other circumstance when strength is needed.
A fugitive slave can survive on a minimum of food and water each day, half the amount anyone else of his race uses. He quickly develops better eating habits but in emergencies survives with little food.

Citizens of New Phlan have free access into and out of the New City.
The Council of Phlan have invested heavily in the training and preparation of adventurers for their battles against the monsters of the Old City. Characters from New Phlan may learn non-weapon proficiencies from all groups without spending extra slots. In addition, Phlan natives are assumed to already be enrolled in the “New Phlan Public Training Hall”, and may train there for half the usual cost (500gp each level).
Over the course of recent years the spellcasters of New Phlan have turned away from offensive magic favored by their neighbors and mastered the more subtle and defensive elements of spellcasting. As a result, they can prepare an additional spell for each spell level available to them. These additional spells must come from the abjuration school or the Protection priest sphere. This stacks with any bonus spells from high ability scores, specialization, or other sources.
Additionally, each native Phlannar character “knows someone”. This “someone” is an NPC of 1d4+2 levels in any one character class, usually living in the Old City. This NPC will provide a favor (pawn goods, provide sage advice, provide a safe-house) for the PC once per month. Any favors beyond that require a favor in return. This NPC will never risk his or her life for the character.

Half-ogre infravision enables them to discern gradients of heat within 60 feet in darkness.
Half-ogres gain hit dice by class and receive 4 bonus hit points at 1st level.
Half-ogres are large creatures and can carry 50% more than a human of similar strength.
A half-ogre’s tough hide grants him +2 to his natural AC. As with all creatures with natural armor, this is superseded by (does not stack with) actual worn armor. Armor that grants an armor bonus of +2 or less grants a +1 bonus to the half-ogre’s AC (this does stack).
Half-ogre priests gain minor access to the spheres of Combat, Divination, Healing, Protection, and Sun, in addition to the spheres normally granted to their priest class.
Single-classed half-ogres with exceptional ability scores are able to advance nearly as high as their human forebears. A single classed half-ogre adds double the normal number of additional levels to his racial maximum (thus a half-ogre cleric with a Wisdom of 18 could potentially reach 10th level).

Psionicists gain a +2 bonus on all saving throws us. enchantment/charm spells and the like. This is in addition to their magical defense adjustment for high Willpower.
-
-
Penalties:
Special Disadvantages:

Even freed slaves have lived as slaves all their lives and suffer a -3 reaction penalty in dealing with non-slave civilized characters. Escaped characters are suspicious and paranoid, and legitimately free characters still carry the social stigma of a slave’s birth.
While they are highly trained, slave warriors must abide by the regimen set for them. Slave warriors may not gain weapon specialization or fighting style specialization at 1st level. After initial character creation, he may use his weapon proficiencies however he chooses.
A runaway slave may be hunted by his former owner with the aid of bounty hunters and assassins.
This hunting can go on for years, until his former owner and anyone else with an interest in him dies. The punishment for escaping slavery is nearly always death.

Optional
A player may wish to play a slave warrior who is still a slave. In such cases the character is assumed to be adventuring under the orders of his master. He is expected to follow orders from his master to the letter, but in exchange has his food and board payed for and starts with a free suit of Scale Mail armor, one sword (player’s choice), and one polearm (player’s choice).

The constant turmoil in Phlan and the Council’s tendency to hand out favors and monopolies has left the city’s economy in shambles and the vast majority of its citizens impoverished. Phlan natives start with half as much starting cash as other characters of the same class and kit. This includes flat amounts of starting gold, such as that granted by the Noble kit.
Though the reputation of the city-states are less sinister than Hillsfar or Mulmaster, that is not saying much. These characters have only the normal Moonsea native bias to overcome. Mooneyes from New Phlan suffer a -2 on NPC reaction rolls with anyone not native to the Moonsea.
While these spellcasters have mastered the art of protective magic, they have become less proficient when using magic to inflict damage on their enemies. Any spell cast by a caster of Phlan that directly harms an opponent has a -1 penalty for every die rolled for damage (minimum 1 per die).

Half-Ogres take damage as Large creatures.
Dwarves and Gnomes gain a +4 bonus to AC against Half-Ogres.
Background: Half-ogres are the offspring of ogre and human matings. They have much of the strength and size of their ogre heritage, but also retain much of the native intelligence and reason of their human side. Half-ogres stand between seven and eight feet tall, appearing as huge humans. The skin coloration that marks ogres is very much subdued in half-ogres: swarthy skin, lank hair and usually, but not always, human eyes.
Half-ogres have a fairly easy time of it, for their monstrous sides are tempered by human thoughts and emotions. Except for their unusual size, they look much like ugly humans. This makes it easier for them to find a place in human society, even if they must hide part of their heritage.

Gildors was given up as a slave to Mov-bray Tharsudottir in Kur-Tharsu. He was only 5 at the time. For 14 years he has worked for her. Training as a slave warrior/psionicist. Even Professor swipe trained him in psionics in New Phlan when New Phlan sprung to life several years ago. With New Phlan outlawing slavery he hopes to be a free half-ogre soon.

Gildors is a favorite slave and as such gets more luxuries than most others. His life is not unpleasant as a slave. He just isn’t free and he often wonders what he’d do once he is free. While working for Lady Mov-Bray he showed an aptitude in cartography and has been studying it. Lady Mov-Bray has provided him with Ornate HIde Armor, a Shakujo Yari, and a Sword, Katana (two-handed) for his duties.

Two years ago on one of Lady Mov-bray’s twice a year visits to New Phlan, Gildors had joined the religion of Mask. While studying the religion he liked their point of view on slavery. While he enjoyed his time with Lady Mov-bray he often wondered how things would be if he were free. 6 months ago on their last visit to the city Lady Mov-bray was notified that the council had outlawed the slave trade.

Lady Mov-Bray had set things up with Faelana Beragaion to obtain Gildors citizenship on his current trip with Lady Mov-Bray. They have an appointment to meet with her to finalize everything. Gildors visited Lady Movbray’s manor in New Phlan, and found it unfit for humanoid habitation, being surrounded and inhabited by monsters which not even an ogre could commune with. During this 6 months he continued studying cartography with the cartographer in town. During her visits Lady Mov-Bray and Gildors met Ohlo and Osahk several times.

Mind Blank is always active automatically and by default. 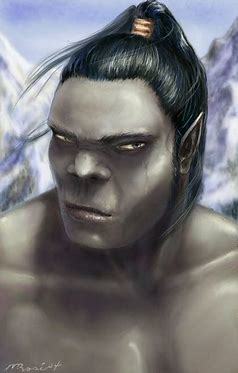