Hektor (The Other One)

Led on by their trained pack of mastiffs, the Hound Master and three other dwarves from the Griff Clan, cautiously approached the top of the rocky hilltop where the pack eagerly waited.
Still in the process of winding the now empty, corded-leather leashes around his thick, hairy forearm, the Hound Master walked amongst the anxious pack, giving quiet, calming commands to settle his “kids”, as they were so often fondly referred as.

Heavy crossbows at the ready, each armed with bolts, their heads barbed and made of lead, the remaining members of the hunting party joined in looking down at what had excited the pack moments before.

What lay before them was a confusing, yet obviously, tragic visage.

Winding away like a great serpent, into the distance, stretched an ancient, dry river bed. It’s eroded, debris encrusted banks tapered twenty feet down where dried current patterns were like so many scars.

But it was the enormous rift in the far bank and the macabre display around and within that stayed their vision.

Almost 100 feet across and an untold depth, the rift apparently had served as a homestead for it’s huge, now deceased, occupants.

Coming to either side of him, the others nodded their agreement.
All of the hounds now lay on their bellies, ears down, muzzles resting on paws.

After a preliminary search around the grisly site, the party, led by the pack, made their way down to the opening, careful not to disturb the scene so that some sense could hopefully be made of what had happened.

The eldest of the group, Anatoleos, rubbed his chin, thickly covered with braided, dark, brown, hair as he surveyed the bodies and surroundings.

His wizened, somber eyes took it all in, letting his centuries of life experience piece the odd event together.

Of the six corpses, three were firbolg, two adults, male and female and one youth. The latter made him draw breath and close his eyes briefly before exhaling and resuming count.
The other three, two of which were torn in half, the third still grasped in the male’s huge, bloody hand were kobolds.

Cronus, saddened, was about to give orders to make funeral piers for the family of firbolg, when there came a baby’s cry.
The firbolg youth was still alive.

In the end, it was discovered that poison killed the adult firbolgs and an attempt on the babe’s life, leaving the orphan with only one good eye.

Anatoleous , so touched and impressed with the parents, being poisoned, and still managing to slay the assassins and save their child, that he brought the orphan back to his clan and raised the little giant as if it were his own blood, and given the name Hector.

*Whip*The whip or bull whip is a long, heavy, plaited lash usually made of leather or rawhide (untanned hide). The braided leather is thicker toward the handle, narrowing to a slender cord at the end. Some handles are wooden rods attached to the lash, while others are part of the same piece of rawhide. The whip’s length varies from 15 to 25 feet. A whip is carried coiled and attached to the user’s belt. Common uses for the whip include leading herd animals and as a tool for punishment.

If a character wishes to knock a weapon out of an opponent’s hand, this may be attempted with a whip using a Called Shot with intent to disarm. The attacker gets a -4 penalty on his attack roll. A character proficient with the whip can entangle an opponent’s limbs or weapon. Before rolling the attack die, the user declares whether or not he intends to entangle. If a hit is scored, some sort of entanglement occurs. If wielded by a non-proficient user, the chance to entangle is only 5%. If wielded by someone proficient, there is a 5% chance per level that entanglement occurs (to a maximum of 95%). Percentile dice are rolled to determine the exact effect. The entanglement chances are 50% (01-50 on 1d100) for one limb, 10% (51-60) for two limbs, 20% (61-80) for the weapon arm and the weapon, and 20% (81-00) for the head.

Equipment:
(all items, unless otherwise specified, are giant-kin sized)

Hektor (The Other One) 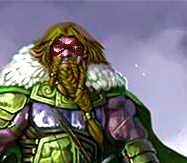