Lothar is a young man, fairly recently come of age with brown, half-long hair and a lean, but strong, build. He looks at you with sharp grey-green eyes. His clothing is typically Cormyran in cut, but more subdued in color and decoration.

Armor:
+1 Splint Mail (40Lb)
Open-faced Helm (7Lb)
Medium Shield (10Lb) (Shows family crest with a cadency mark, showing him to be the 8th child, it is faded and somewhat worn.)
Bracers of Archery

Clothing:
Clothing typical of Cormyran lower nobility/chivalry, but discreetly modified to be more suited to a travelling lifestyle, it shows both a degree of wear as well as carefull maintenance. It it rather subdued in general appearance, for Cormyran clothing.

Personal effects:
The metal parts of his lance (which he disassembled to save weight once his horse was crippled and had to be put down) (??Lb)
His sheaf of parchment notes and such on his family history (1Lb)
His heirloom medallion (see Biography)

Lothar is the eight child of a a lesser house of nobility/chivalry on the outskirts of Cormyr. He has known from early in life that there would be insufficient lands and titles for him to inherit anything. Traditionally his choices in life would have been to enter the clergy, or the service of another lord as a Man-at-arms. If he was lucky he would gain enough favor to attain an administrative function at the court of a High Lord or even the king/queen. Lothar however, took the rarely chosen option: to strike out on his own, and claim his own place in the world. He was inspired by this by stories his great-aunt told him in his younger years that “his family’s roots may not be as deep in Cormyr as they seem, and you may find there are roots elsewhere as well.” A revelation that the rest of his family was not eager to be discussed or even hinted at. During his research in the family history and vaults he found two intriguing clues: A mention in the family records of births, inheritance and deaths of one Laetitia described as “taking the name of” Dravion, where all other Lords and Ladies of house Dravion are registered as “being born of” Dravion… The second is a medallion that entered the family’s treasury somewhere between the time Laetitia Dravion became head of the House and her death. It is of an unusual, foreign design and is sad to have been part of her personal effects. According to a antiquarian he showed it, it is of a style typical of old Phlan, and is known as a “Medallion of Claiming”. Tradition has it that these types of medallions were both maps and a keys to a safehold or vault, much like a modern safe key… With nothing more to go on when he came to the age to make his choice, Lothar collected his gear and horse and set off to find Phlan…

Appearance:
Lothar is a young man, fairly recently come of age with brown, half-long hair and a lean, but strong, build. He looks at you with sharp grey-green eyes. His clothing is typically Cormyran in cut, but more subdued in color and decoration. His tunic has an embroidered crest on it, the same as on his worn and faded shield: checkered white and green, with a stag’s head in natural colors, the top of the shield bears a brass Cross Moline. Over his clothing he typically wears a heavy woolen cloak and hood in dark green. On his back he carries a large pack, which seems to weigh him down somewhat. 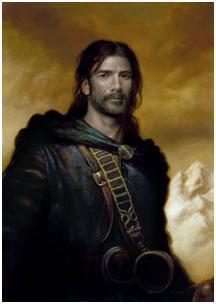