Lyrathwen, more commonly known as ‘Lyra’, was born and raised in Waterdeep. She never knew her father, and learned to be quiet and polite from a young age so she would not disturb her mother’s research. Lyra found at an early age, she was able to touch the minds of others, to share thoughts, to see what they see. Faelana did not approve of such things, but did allow Lyra to train to control it, and to shut out the thoughts of others. Eventually, Lyra was able to step through space and occasionally time. Faelana also ensured that Lyra’s education included pursuits more becoming of a young lady.

Faelana worked as a research assistant to several of the brightest minds in Waterdeep, until very recently.

Lyra awoke to her mother throwing decades of thaumaturgical research into the fireplace, and was instructed to gather up her things and get ready to depart immediately. The only question she knew she would get an answer to was “Where are we going?”.

The travel was easy, at least up until her mother’s divinations pinpointed the boat of settlers to Phlan. Have you ever tried to teleport onto a moving target while inside someone else’s mind to be able to see the destination?

After a brief and unpleasant career as an chartered adventurer in Phlan, she retired and took up work as personal Herald to the Clerk of the Council of New Phlan (i.e. her mom). 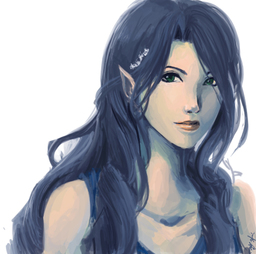