Hand Of Fate – 8 hour duration, cast when waiting for Jack in front of pentagram room.

Nindigor can, quite instantly, see. Albeit the glass eye’s enchantment appears to lack color perception, making the world oddly half-black-and-white.

“Its mandibles snap at his head, one fang piercing and nearly gouging out his left eye -(11 damage, -4 to attacks from being blind in one eye).”-

The voice of the poet of justice rings in Nindigor’s head: “Occular redemption may be had, but by the hand of one who’s mad. Firm and steady they must be, else you may not ever see.”

Homeland Advantages
*Griff Clan dwarves are have remarkably fine-tuned senses. All of their Detection Proficiencies function at a range of 15 feet (instead of 10 feet).

Born of the Griff Clan, at a very young age Nindigor began having visions. As he aged, they grew stronger and clearer until eventually he found himself walking alongside a god.

The God imparted upon him a prophecy that one day technology and sorcery would reach an inflection point that would usher the realms into a period of prosperity, peace and justice. However, preceding this period there would be 1000 years of war, pain, suffering and genocide, known as ‘The Rift’. And so Nindigor set out to travel far and wide until finally reaching the library fortress of Candlekeep. Here he studied for years until became consumed with the lore surrounding a fabled Ultroloth by the name of Dendrosathol the Mnemoclast.

At the same time, the premonitions grew stronger. The god revealed itself to be Hoar, The Doombringer. Hoar imparted upon Nindigor that vengeance and revenge are applicable to both those who have done ill deeds in the past, but also those who will commit crimes or engage in activities that will cause pain and suffering in the future.

- ‘The men of Hillsfar have and will do both!’, Hoar imparted. ‘They view the other races as inferior but do not hesitate to enrich themselves through their own power and greed! I forsee a day when this will change. 100 years from now a Queen will be born. Her bloodline and rights to ascendency will be heavily disputed, but she will persevere. From this Hillsfar will begin to transform, at first militarily and then technologically. Lines will be drawn, alliances forged, broken, and reforged countless times again and again until the world will lie in ash and fire. Your home, your kin, everything you know, will be forgotten. It must be stopped.’ 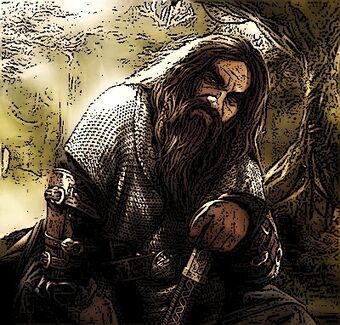