Tom is a head taller than most men, with light brown hair, green eyes, and a curly brown beard.

Tom is very tall. He is an imposing figure that can often make other people back down.

Tom was born in the northern lands of Damara. He apprenticed as a stonemason and architect, and eventually became a “Holy Builder”—one of Gond’s craftsman-priests (he glorifies his god through the work of his hands, rather than prayers or proselytizing.) He has worked on a variety of buildings, ranging from small homes to the cathedral of Ilmater in Helgabal. His dream is to one day serve as “Master Builder” (chief architect and mason) for a great cathedral.

When he was around his early twenties he worked on a small parish church of Tyr owned by his wife’s, Agnes, Father who was the priest in the town. Agnes would often talk to him as he worked on the northern wall which had crumbled, and they built up a relationship. They had five children, a son Alfred, now an apprentice smith in Bloodstone VIllage, a girl called Matilda who had died when she was two years old, a child who was born dead who Tom had wanted to call Harold, and a daughter, Martha, now age ten.

Tom’s last job was building a manor house for a young noble in the lands of Vaasa. He enjoys making something so simple, but dreams of designing a cathedral. His work was interupted by the arrival of a squire, who told him that the house is to be decommissioned, due to the fact that the young lord they were building it for, marriage had been cancelled, and as such he has no need for it anymore. Suddenly without work, with winter approaching, Tom, Agnes, and Martha began the long migration south, across the Galena Mountains and into Thar and the Moonsea, looking for work.

Agnes died during the birth of their last child, Jonathan, while they were traveling through Thar. Miles from the nearest town, on foot, in winter, Tom had no way to feed the infant and was forced to leave him exposed to the elements to die. Tom and Martha traveled on to Glister, where he managed to feed them through the winter by selling small miracles, and where he heard of the reclamation of Phlan and, more importantly, of the Bishop of Tyr moving the seat of his diocese back to the ancient city.

When the winter snows broke, Tom and Martha traveled to Phlan, where Tom hoped to find work on the restoration of the city and, hopefully, in building a new Cathedral to Tyr. Sadly, when they arrived, he found the city still mostly overrun with monsters, the port closed, the church of Tyr already built, and a number of Gondsmen already present. He worked for a month finishing a house for a merchant—enough to pay for simple lodgings for himself and Martha, and to pay to apprentice Martha as a shop-girl at the grocer’s.

Rather than continue to struggle to find work as a mason, Tom has decided to try to join one of the many groups of adventurers in the town. He is sure that, once the monsters are cleared from the city, then he will certainly have work to do rebuilding. 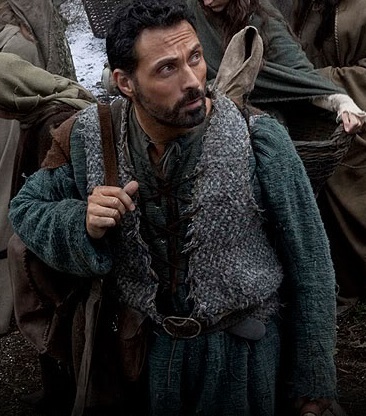