Aerdi's Rod of the Sea

This beautiful rod is fully a yard long, made of a hollow shaft of silver, carved with seashells with a polished sphere of lapis lazuli clutched at the end. This defensive weapon was crafted by the Merchant-Mage Aerdi, whole sailed upon the pirate infested waters of the Sea of Fallen Stars. Unfortunately, the rod proved no defense against a mighty serpent that attacked Aerdi’s ship when transporting passengers to the city of Phlan on the Moonsea. Aerdi and serpent both died in the altercation, and the rod was taken by some adventurous passengers, including a young archer by the name of Aroelor.

Activating the rod has a +5 initiative modifier and all spells are cast at the 12th level of ability. All abilities of the rod require the users concentration to maintain, fading immediately if his concentration is broken. The wielder may move normally (even to dodge attacks) while using the rod, but my not take other actions such as attacking or casting a spell.

The rod can be recharged.

Aerdi's Rod of the Sea 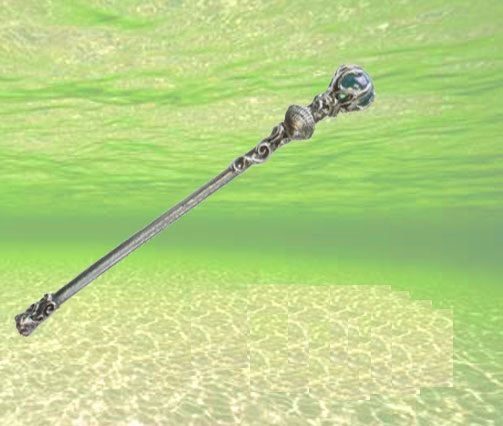