Aspasia’s Shroud is a burial shroud, a simple linen cloth, roughly seven feet in length. with additional strips sewn to the sides to bind it closed. How and why the enchanted shroud came to be in a treasure horde beneath Valjevo Castle is anyone’s guess. It radiates a faint aura of magic of an indeterminate nature.

A creature that is covered with the shroud and then falls asleep is rendered invisible until they wake (along with anything they are wearing or holding). The shroud itself remains visible. Once the person beneath the shroud is fully asleep, a minor illusion causes the shroud appear to be lying discarded on a flat surface, as if there were nothing beneath it. The sleeper remains invisible even if the shroud is removed, until they wake up.1 There is no limit to the number of creatures that can be concealed using the shroud, so long as the shroud is covering them at the time that they fall asleep.

Just be aware that while you are sleeping invisibly, nothing prevents some other schmuck from coming along and walking off with the shroud. 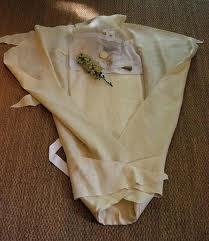