An ornate bell with an iron body and clapper, and an ornate brass handle.

This ornate iron and brass bell was purchased from Laris’s magic item shop in Hillsfar. The bell clangs with a cold, hard knell when struck and anyone touching the bell feels a deep sense of dread.

The bell is protected by four Gaki, spirits believed to have been false, corrupted, compulsive, deceitful, jealous or greedy people in a previous life and cursed with insatiable hunger. When the bell is rung, the spirits immediately appear (use the stats for Spectres from the monster manual). These spirits remain for as long as the user continues to ring the bell, but cannot stray more than 90 feet from the bell. The person ringing the bell has no control over the spirits, but the spirits are incapable of attacking the ringer.

Ringing the bell, or maintaining the ringing, is a bonus action. If the ringer fails to use an action to keep ringing on a given round, the spirits disappear back into the bell. If a spirit is killed it is no longer bound to the bell, and will not appear when the bell is rung. If all four spirits are destroyed, the bell shatters. 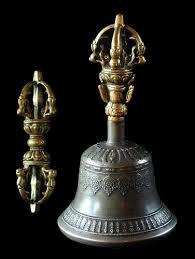