A minor holy relic of the church of Mask, this night-black shortsword once belonged to the Saint Giacomo Molitani, a infamous thief and false-facer (disguise artist) in the metropolis of Manshaka in Calimshan. According to legend, Saint Giacomo and his twin brother, Saint Castellano, amassed a sizable fortune, several hundreds of thousands of gold pieces, without ever once drawing their matching blades — for unnecessary violence is an affront to the god of subtlety, and the two brothers were never caught.

The legend goes on to say that the first time Calo and Galdo were drawn in anger, it was by the assassin who murdered the brothers in their sleep in order to steal their fortune, who used them to slit its owners’ throats. While Galdo was included in Mask’s cut when the Assassin made his next tithe to his own temple in Westgate. He kept Calo as a reminder of his victory.

Like its twin, Calo functions as a normal shortsword in combat, granting no bonuses to either attack or damage rolls. However, as long as the sword remains sheathed, it’s bearer gains a +1 bonus to both his Wisdom (Intuition and Willpower) and Dexterity (Aim and Balance) ability scores. These bonuses do not stack with those granted by Galdo.

If both weapons are in the possession of the same user, the wielder can call upon the Saints’ power to access any of the following spells, so long as he has amassed sufficient wealth to impress them, as follows:

When determining if the user has sufficient wealth to impress Saint Giacomo and Saint Castellano, only the raw value of coins and gems carried on his person are considered. Other goods (including objects of art, weapons, or magic items) he may be carrying, or properties he may own, or treasure he may have stashed away safely are not counted. Giacomo and Castellano only care about the liquid assets that the bearer has immediate, ready access to. All granted powers are cast at the 9th level of ability. 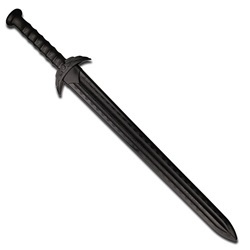