This item is a ten-gallon black, cast iron cauldron with a beveled rim and a ring of seemingly nonsensical letters, numerals, and runes carved around the outside. The cauldron weighs 45 pounds, empty.

Once per day, by bringing the full cauldron to a boil and concentrating on the swirling steam coming off of the water as it is heated, a user can gain the benefits of an Augury spell. It takes one full hour to heat the water to boiling and then perform the divination. Unlike a typical augury, the cauldron can predict events up to 24 hours in the future (rather than only one-half hour).

Up to three characters can observe the cauldron at one time, each being able to ask a single question, but all participants must be present for the entire boiling process. 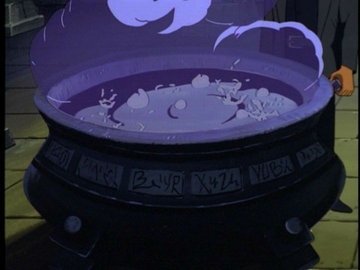