An ornate longsword of dwarven make.

Dybfryser (or Deepchill as it is called in common) is an ornate and ancient longsword of dwarven make. The blade has a slight blue tint and is always ice-cold to the touch (though the hilt can be handled without harm). When the air temperature is below freezing, the sword emits a blue-white light which grows in intensity as the air grows colder (from as dim as a candle at 32° F to as bright as a torch at 0° F).

Deepchill is intelligent (Int 15, LN alignment, speaks Dethek, Auld Tharian, and Noga and can read Dwarven Runes). It used to belong to a dwarven king, who lost it in battle to king Vinjarek of Nog who was then buried with the blade in the valley of Dekon Thar. The sword is only really happy underground. Deepchill would rather belong to a dwarf, but anyone who spends a lot of time underground is all right. He (the blade thinks of itself as male) prefers to speak in dwarven, only speaking other languages if absolutely necessary.

Deepchill can perceive anything within 60 feet of itself (with the same efficacy as normal dwarven hearing and sight, including darkvision). His experience with underground environments allows Deepchill to use all of the standard Dwarven Detection Proficiencies, all with a proficiency score of 15, out to the limits of its perception.

When held in hand, Deepchill grants its wielder Resistance to damage from fire. If Deepchill’s blade is thrust into a fire source, their is a 50% chance per round that the fire will be immediately extinguished, so long as the blaze is no larger than 20 feet in diameter. This includes ongoing magical fire effects (such as a wall of fire), but not instantaneous fire-based attacks (such as a fireball or a red dragon’s breath). 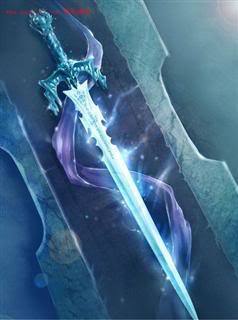