This vile glimmering sword is made from an impossible compound of lanthanide and rare earth metals. It burns with a toxic green flame continuously, so long as it is exposed to any oxygen, including that in water. Beneath the flames, the blade is made of an unusually soft, silvery-white metal; the the enchantments that allow it to avoid being consumed by reaction with the air also protect it from deformation by normal use as a weapon. It must be stored in a container of inert fluid to protect it from atmospheric oxygen and moisture, or else held in hand at all times; any other storage medium will be progressively destroyed by its sickly flames.

Any time the bearer rolls a natural 1 on an attack roll or saving throw while carrying the Europium Blade, they are themselves exposed to the flames, suffering 1d4 points of fire damage and 1d4 points of psionic damage. 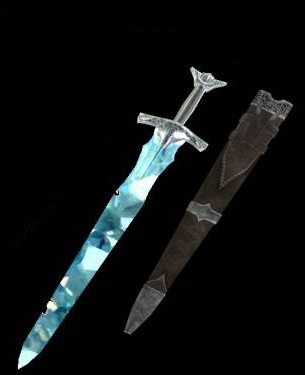