An interlocking chain of rotting, carved, wood and bone links.

The Flail of Rotting is an interlocking chain of carved wood and bone links, capped at one end with a skull-shaped mass of petrified fungus. The chain can be wielded as a normal horseman’s flail, but imposes a -1 penalty on the wielder’s attack and damage rolls due to the soft materials from which it is constructed. The Flail of Rotting is capable of striking creatures harmed only by magical weapons.

The Flail of Rotting is, literally, rotting, making it extremely fragile. On any attack roll of a natural “1” or a natural “20” one or more links of the chain break. The remaining parts of the flail can still be used, but at an additional -2 penalty on attack and damage until it is repaired. The rotting material of the flail can be repaired by taking a full-round action to squish the links back together (which can be done bare-handed with a successful Strength check).1 If a natural 1 or natural 20 is rolled when wielding the broken flail, the head breaks apart and the weapon is destroyed.

In addition to dealing damage, any successful strike from the flail causes some portion of the target’s matter to decay: muscles atrophy, joints lock up, skin becomes poxy, or organs begin to fail. Each successful attack deals 1 point of damage to a random ability score (the victim rolls 1d12). This ability damage can be healed normally.

1 A character with the Crude Weaponsmithing ability can repair the flail without making a check. 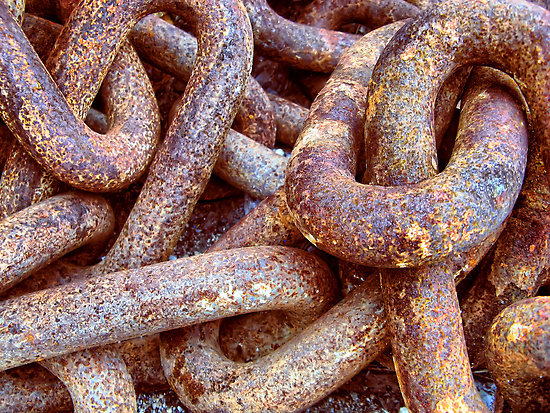