A massive two-handed club made of solid iron, with an ornate square-sectioned head.

This massive two-handed club made of solid iron supposedly belonged to Flandal Steelskin, the gnomish god of smithcraft. How the tool of a god ended up in the hands of a human woman is a great mystery—presumably it is some mortal mage’s attempt at a replica. Regardless of the club’s true origins, the weapon possesses considerable powers.

The “Iron Club” functions as a normal club, gaining a +4 bonus on attack and damage rolls. It is treated as both magical and cold iron for determining what kinds of creatures can be damaged by it. In addition, strikes from the club deal double damage to cold-using and cold-dwelling creatures. When held in hand, it empowers the user to speak with and understand all fire-using creatures (red dragons, chimerae, salamanders, and the like), as if they possessed a shared language. Six times per day, by speaking the command phrase—“May you burn in the fires of Flandal’s forge!”—the club will shoot forth a fireball (as spell), dealing 6d6 damage. 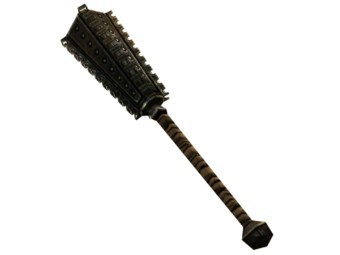