This bell is almost a twin of the Bell of Treachery, save that the handle, cup, and clapper are made of solid gold. It was purchased along with its twin from the Magic and Curios Shop of Hillsfar.

The bell can be rung as an action. When rung, a small, golden pellet falls from the cup. This pellet will explode after 3 rounds, dealing 6d6 fire damage in a 20 foot radius (DC 13 Dex save for half damage). Until the 3 round delay has passed, the pellet can be handled or even thrown without harm (allowing it to be combined with a sling to great effect). If the bell is placed over the pellet, the pellet will not explode until the bell is removed, but will explode immediately when it is removed. The bell itself is immune to all fire damage. 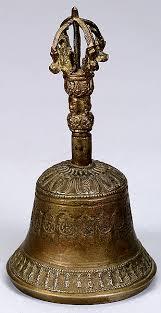