A bone staff, slightly curved and sharpened on one end, topped with a hobgoblin skull.

This staff was made for Grimnir by ‘Master’, the aboleth living in the blackwater lake beneath Sorcerer’s Island. The staff was made from one of the spines of ‘Pokey’, the crocodilian eidolon summoned by Grminir and Melastasya, and topped with the skull of a hobgoblin which had been impaled on it when it was still attached to Pokey. The staff only functions in the hands of Grimnir, to anyone else it exhibits no magical properties.

Once per day, the staff can be used to enslave a single creature within 30 feet. The target must succeed on a DC 14 Wisdom saving throw or be magically charmed by Grimnir (and ‘Master’). This lasts until Grimnir is slain or until Grimnir is on a different plane of existence from the target. The charmed target is under Grimnir and ’Master’s’ control, cannot take reactions (of any kind), and can communicate telepathically with Grimnir and ‘Master’ over any distance.

If Grimnir and ‘Master’ offer conflicting commands to a target, they must make opposed Charisma checks, with the winner’s commands taking precedence. If they tie on such a check, the target is allowed another immediate save to shrug off the enslavement. 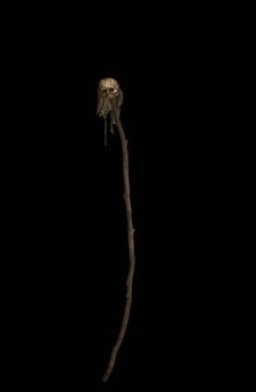