This fairly plain, strait-bladed shortsword with no cross-guard—more like a very long dagger really—was given its rather festive name by Princess. The magical sword was a gift from her father, the Crown Duke of Threskul on her fifteenth nameday, when the spoiled girl begged for fencing lessons rather than a ball.

Handsome Prince functions as a magical shortsword, gaining a +1 bonus on attack and damage rolls. In addition, each hit from the sword causes bleeding, as per a critical hit. The first hit on a given target causes minor bleeding, the second increases this to major bleeding, and a third increases it to severe bleeding—hits after the third have no additional effects. Damage and bleeding from the sword cannot be healed by regeneration, nor by magical means short of a wish (neither potion nor spell)—only normal rest, time, or application of the Healing proficiency can stem the flow of blood caused by Handsome Prince. 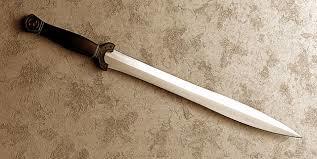