A gnomish war pick with a very narrow neck, bearing the word "hatred" in gnomish script.

A “lohar”, or war pick used by Bannochi gnome warriors from the Dragonden Pass region. Tradition dictated that each male member of the Bannochi tribe was to individually make and decorate their own lohar under the supervision of a master weaponsmith, and the patterns and decorations were different on each one. The lohar is a sturdy and viscious little weapon, and is quite hard to find. The hardwood grip on this example is newer than the shaft and head, which most likely dates from the early 1100’s DR.

This particular lohar was taken from the body of the gnome mercenary Modwood Metroweaver, found dead on the battlefield outside Kryptgarten.

Hatred’s Lohar functions as a +1 magical war pick. When the lohar is drawn, the bearer of the weapon tends to attract the ire of those around him. The wielder makes all Persuasion checks with Disadvantage. Anyone engaged in melee combat with the wielder of Hatred’s Lohar is compelled to fight to the death. An opponent within 10 feet of Hatred’s Lohar must succeed on a Charisma save (DC 12) any time it attempts to take any action other than an Attack action directed at the wielder of the war pick. 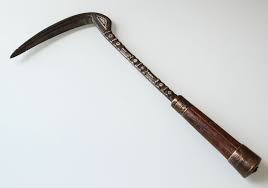