This open-faced bronze great-helm was the finest (and only magical) piece in a large cache of armor taken by the Evereskan Sky-Guard during an operation in southern Chessenta, where it was undoubtedly made. The inscriptions suggest that the helm was originally captured as booty and offered as a dedication. It radiates a faint aura of Illusion magic if such is detected for, but only if the person detecting magic is within 30 feet of the helm (see below).

In repoussé on both sides of the helmet is a pair of winged human youths grasping a pair of intertwined snakes. Below them are two panthers with a common head. The helmet is inscribed “Neopolis.” In repoussé on both sides of the other helmet is a horse; incised on each cheekpiece is a lion. An inscription on the left side of the helmet states (in Chessentan) “Synenitos, the son of Euklotas, took this.”

Synenitos’ Helm of Darkness functions as a bronze great helm in combat, granting the wearer an AC of 18 against attacks that target the head. In addition, the magic of the helm reduces all damage the wearer suffers from attacks by 1 point per hit. 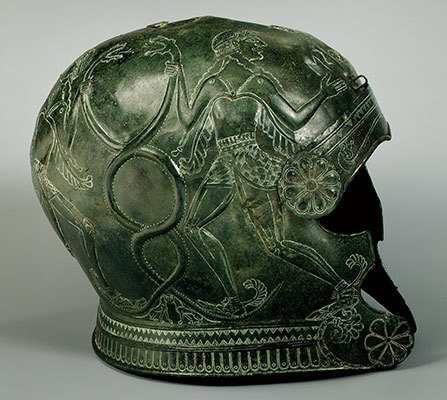