The Impaler of Thorns is an ancient weapon dating back to Netherese times, where it was often used by city guards to aid in breaking up civil unrest. This enchanted Partisan’s shaft is made of darkwood, its head a thorn-like, wide-bladed barb.

In combat, the Impaler of Thorns functions as a normal Partisan, though it counts as a magical weapon for determining what creatures may be harmed by it.

Whenever the Impaler of Thornsscores a critical hit it unleashes an unsettling screech, as of some wild beast in anger. All creatures within a 30-ft. radius (save those wielding an Impaler of Thorns) must make a save vs. paralyzation or become overwhelmed with sadness and despair, suffering a –2 penalty on attack rolls, saving throws, proficiency checks, and weapon damage rolls for 6 rounds. 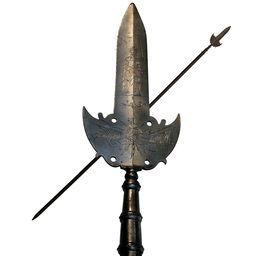