“Licata” is a light-weight spiked steel flail, with an inlaid abalone shell handle. The chain is four-to-one linked, for exceptional strength and thirty-three inches long, ending in a five-inch diameter spiked dodecahedron head with 19 individual spikes. The tabled abalone shell handle ends in a steel pommel-spike for close-quarters work. This ornate, custom-designed weapon was found discarded on the field of battle outside Kryptgarten. It is unknown who it belonged to, but the original wielder is presumed dead, as no sane, living person would part with such an exquisite weapon.

Licata functions as a +1 magical flail, but deals piercing, rather than bludgeoning damage. The wielder may use a bonus action once per round to attack with the pommel-spike, dealing damage as a dagger. In addition, as a bonus action, after making an attack action, the wielder can cause Licata to emit a stream of dancing lights (as the spell) by speaking the flail’s name aloud. These lights take the form of spikey, glowing stars, trailing from the flail’s head. This effect can be used once, after which it requires a short or long rest to recharge. 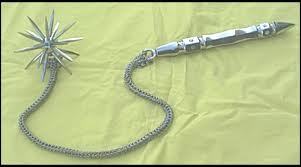