An ornately carved silver brooch, bearing the likeness of a crescent moon.

An ornately carved silver brooch, bearing the likeness of a crescent moon with upturned horns. If worn by a spellcaster, it bestows additional power to any spell cast which conjures light (such as a light, dancing lights, or continual flame spell). The light from these spells causes all lycanthropes in the area of the light to assume animal form (no saving throw). They remain as animals until they leave the lighted area. The lunar brooch operates continuously while worn.

This particular brooch was discovered in the ruins of the Noga city of Dekon Thar. In addition to the powers described above, it serves as a key to the “Moon Steps” a ruined monolith in the north-west of the city. Despite their ruined and collapsed state, the Moon Steps mark the physical location of a terminus of the “Infinite Staircase”, a major route through the various planes of existence. The staircase is normally accessible from this location only for one hour preceding and following midnight on the night of a full moon. Anyone wearing the Lunar Brooch, however, can both see and ascend the staircase at any time, day or night. 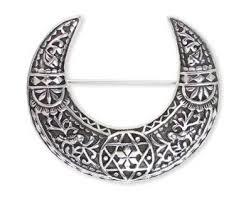