A humanoid arm, covered with mottled red and blue scales, ending in very long fingers. A pair of curved, bony, claw-like ovipositors sprout from the back of the hand.

A humanoid arm, covered with mottled red and blue scales, ending in very long fingers. The back of the hand sports two long, sharp, bony, claw-like ovipositors. This arm was surgically attached to the left shoulder of the gypsy girl Melastasya by the not-quite-sane wizard Yarash the Sorcerer, in his laboratory beneath Sorcerer’s Island, and later modified when she desired to have a tattoo removed from the arm.

The arm and hand function normally for all purposes. It has sufficient dexterity to pick pockets, open locks, cast spells, and wield weapons. The arm can also be used to make a claw attack, either as an attack action or as part of a Flurry of Blows. The claw deals 1d8 points of damage (modified by the user’s Strength or Dexterity as appropriate). If a humanoid target is damaged by the claw, it must succeed on two DC 15 Constitution saves.

If the first save is failed, the humanoid target is infected with a disease called Chaos Phage. While infected the target cannot regain hit points by any means, and its hit point maximum is reduced by 3d6 every 24 hours. If the disease reduces the target’s hit point maximum to 0, the target instantly transforms into a red slaad, or, if it had the ability to cast spells of 3rd level or higher, into a green slaad. The disease can be cured by any spell or effect which could cure a normal disease. Once the disease has run its course, only a wish or equally powerful spell can reverse the transformation.

If the second save is failed, the humanoid target is implanted with a slaad egg. Over three months the egg moves to the target’s chest cavity, gestates, and forms into a Slaad Tadpole (see MM pg 276). In the 24-hour period after the egg hatches, the host starts to feel unwell, its speed is halved and it suffers disadvantage on all attacks, saves, and checks. At the end of the 24-hours, the tadpole eats its way through the host’s vital organs and bursts out through the victim’s chest, killing the host. Once free of the host, the tadpole matures into a fully grown blue or green slaad in 2d12 hours. Any effect which can cure disease causes the egg or tadpole to dissolve, leaving the host unharmed.

A victim that fails both saves can be cured of both infections with a single cure disease spell. Should the slaad egg hatch before the Chaos Phage has run its course, the target will be killed by the tadpole’s exit normally. Should the target transform as a result of the Chaos Phage before the eggs hatch, the hatching process will not kill him, and, in addition, the egg will hatch into 1d4 slaad tadpoles of various coulours. The first is always blue, the second green, the third red, and the fourth (if present) will be a mud slaad.

The arm is, for all purposes, part of Melastasya’s anatomy. Attacks against the arm are made against her normal armor class and count against her hit point pool. However, the arm naturally regenerates. If part of the arm is damaged or severed, the arm will repair itself, regrowing the removed portion after a short rest. If the arm is wholely removed it will regrow after a long rest. The arm has no power to heal or repair the rest of Melastasya’s body. Even should Melastasya die, the arm will continue to repair itself, remaining fresh, new and alive, so long as her ovaries remain intact. 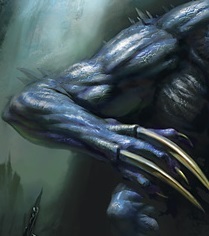