Found in a linen closet in Mornhaven Tower in the Twilight Swamp. The mop appears plain—just a mess of dirty linen strips tied to the end of an old stick, maple by the looks of it. The only thing that sets it apart is a series of grooves near the end of the handle, like a child scratched it with a pen-knife, that look sort of like the letters ‘Pravarp’ (which is, in fact, the mop’s command word).

This magical mop is able to fly through the air at up to 30 base movement speed. The mop can carry 94 pounds at this rate, but every 14 additional pounds slows movement by 1 (it can thus carry a maximum load of 500 pounds). The device can climb or dive at an angle of 30 degrees. The mop will travel to any destination named, alone or with a rider. It will come to its owner from as far away as 300 yards when he speaks the command word.

Perching oneself on the narrow handle of the mop is rather tricky. A character without the Airborne Riding proficiency must make a Balance check with a -2 penalty every time he attempts to change direction or elevation (including taking off, turning, attempting a dive, etc.) or else fall off the Mop. A proficient flyer need make no checks. 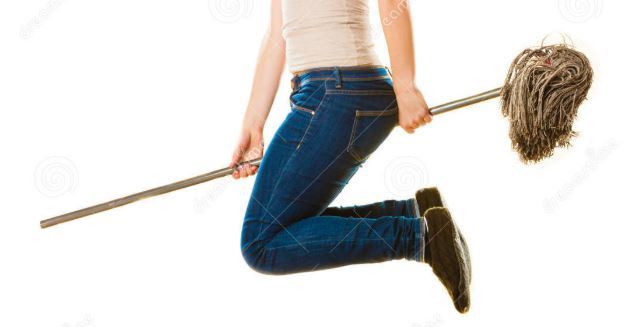