A plain steel longsword with a double ring-guard.

A plain steel longsword with a double ring-guard. Taken from the body of a fallen mercenary after the battle of Kryptgarten. Until recently it belonged to the lady-mage, Moriah Stasniuk. When magic is detect for, only the ring-guard registers, neither the blade, nor hilt radiate magic.

Wielded in combat, this weapon functions as a normal longsword, granting no bonuses on attack or damage, though it is treated as a +1 magical weapon for determining what creatures can be harmed by it.

The ring guard on the sword counts as two magical rings for determining what magic items can be worn by the user, superseding the powers of any other magical ring of less than artifact power. Not only is the wearer unable to benefit from magical rings when wielding the sword, anyone struck by the sword is similarly afflicted. Any magical rings worn by a creature damaged by Moriah’s Ringblade cease to function for 1 round per point of damage inflicted by the blade. 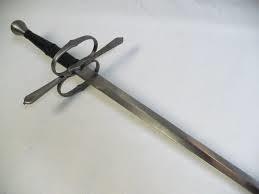