A red-lacquered, bronze shield emblazoned with a golden pentagram.

Nāṉkām is a bronze escutcheon-shaped shield, lacquered red and emblazoned with a golden pentagram on the convex. The inner surface bears an inscription on Noga heirglyphs reading "Fourth, I know that the gods are observing me, so I am ashamed to do what I should not.” It appears largely ornamental in nature, having neither straps nor handle.

Nāṉkām is one of a set of four relics fashioned by the ancient Nogian Mystic, Grand Master Hatim. The inscription on the back is part of a poem which forms the core of the Mystics’ philosophy:

“I have chosen four things to know
and discarded all other things of knowledge.
The first is this: I know that my daily bread is apportioned to me
and will neither be increased or decreased,
so I have stopped trying to add to it.
Secondly, I know I owe to the gods a debt
which no one else can pay for me,
so I am busy about paying it.
Thirdly, I know that there is someone pursuing me—
Death—whom I cannot escape from,
so I have prepared myself to meet him.
Fourth, I know that the gods are observing me,
so I am ashamed to do what I should not.”

Because it has neither straps nor handle, Nāṉkām must be held by the edge with both hands in order to provide effective protection. When wielded in this way, Nāṉkām functions as a normal shield (granting a +2 bonus to the wielder’s armor class). In addition, when held, the pentagram on Nāṉkām’s front bursts into flames. The flames give off light and heat as a torch, and can be used to ignite flammable objects.

Anyone wielding Nāṉkām is also shielded from magical observation, as if protected by a constant Nondetection spell. The shield’s bearer cannot be targeted by any divination spell, nor perceived by magical scrying sensors (he is effectively invisible when viewed with such spells or devices). This protection extends to all items carried by the wielder (so he cannot be indirectly located with spells such as locate object). This only functions when the shield is actually be used (merely having it in one’s possession does not grant this protection).

Any Mystic of Nog holding Nāṉkām can will the shield to adhere to his arm. The shield attaches to the Mystic’s arm, melding with the skin, allowing it to be used as a normal shield while leaving both of the Mystic’s hands free. The Mystic cannot be deprived of the shield by any means save his own desire. 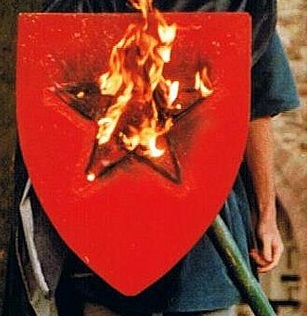