These bizarre-looking crossbows are constructed entirely of light-weight, and oddly-flexible black ceramics. The lathes spread out in three directions, like the legs of a spider, and support a trio of braided wires made from a strange silver-white metal. Likewise, the stock bears grooves for three bolts to be fitted in parallel, and two different triggers mounted beneath the stock allow them to be fired in series, or all at once.

A Nogese Triple-Bow functions exactly like a Light Crossbow, save that it can hold three bolts at full-draw simultaneously, allowing up to three shots before re-loading, without even the cocking action required of a normal repeating crossbow. In addition, the precise engineering of the bow grants the wielder a +1 bonus on all attack rolls.

Alternatively, all three bolts can be fired at a single target simultaneously as a single action. Because the bolts flying in parallel interfere with their individual aerodynamics, three separate attack rolls must still be made (without the usual +1 bonus), and damage for each bolt is determined individually.

The three lathes of the crossbow must each be cocked and loaded separately. After the initial volley, a proficient user can reload and fire a Nogese Triple Bow at the same rate as a normal Light Crossbow, or he may reload all three lathes in a single round if he takes no other actions.

A total of twelve of these rare devices were found in a crate on the lowest level of the Nogese Deep Carbon Observatory beneath Phlan. 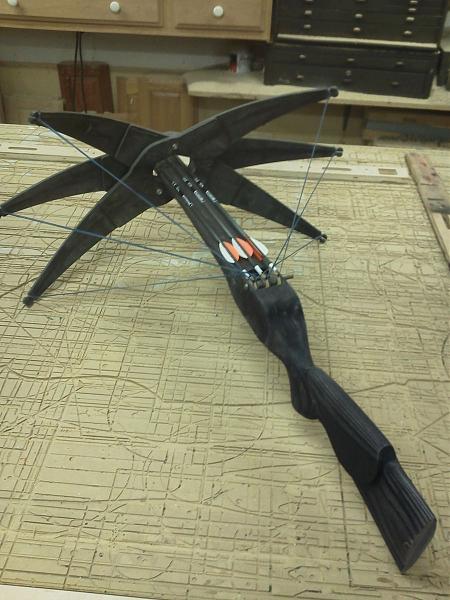