Each of this trio of long-tailed amber monkey figures stands 3 inches high.

This trio of long-tailed monkey figures are carved from amber, each standing 3 inches high. These figurines once graced the mantle of Olaf Gloinson’s uncle, Colimbifur. Absconding with the beautiful carvings was the first of many acts of larceny on the part of the young dwarf. While he originally intended to pawn the monkeys, Olaf found that they were far too useful for dealing with meddlesome guards to part with.

A fourth monkey was added to the set when Traith used the power of the Pool of Radiance to attempt to re-create two that had been destroyed.

The monkeys each comes to life when the command word (“Hey Hey We’re the Monkeys!”) is spoken and activate a special attack power when the individual monkey’s name is spoken. When animated, each monkey uses the statistics given for an Ape (see Monster Manual pg 317). The monkey moves and attacks using the Ape’s statistics and can obey simple commands once animated (one command at a time, up to eight words). Each monkey may be used once per day for up to one turn per activation. At the end of this time, the monkey reverts to statuette form and, if the owner is within 30 feet, blinks back to its owner. An amber monkey follows the orders of the person who activated it.

In addition to the abilities above, each monkey has additional special powers as described here:

Mickey Dolenz — The Monkey of Blinding: This monkey is carved with its hands covering its eyes. When the proper command word is spoken, the monkey grows to the size of a chimpanzee and becomes active. If the item’s owner points to an intended target up to 30 feet away and utters a second command word, the monkey blinks away and reappears on top of the target’s shoulders with its hands clasped firmly over the target’s eyes (the arms and hands lengthen magically to cover a giant’s or dragon’s eyes). The target gains the Blinded condition (see PHB pg. 290). Additionally, the victim must make a Constitution save (DC 13). If the save fails, the monkey has gouged out the target’s eyes, making them permanently blind (unless healed by a cure blindness, regenerate, or similar spell).

The monkey can be removed in a variety of ways. The most basic is by killing it (though weapon attacks against the monkey have a chance of hitting the victim, as above). Using dispel magic causes the monkey to revert to statue form. If the victim uses any form of dimensional travel (misty step, teleport, or the like) or discorporation (gaseous form) the monkey will be left behind. Lastly, the victim can attempt a Strength check (DC 16) to dislodge the monkey by force. If the victim escapes the monkey by teleportation or breaking its grip, but remains within 30 feet, the monkey will reappear on the victim’s back on the user’s turn the next round.

Michael Nesmith — Monkey of Deafening: This monkey is carved with its hands covering its ears and operates similarly to the monkey of blinding. When the monkey lands on its target, it clasps its hands over the target’s ears, giving the target the Deafened condition. Additionally, the victim must make a Constitution save (DC 13). If the save fails, the monkey has clapped the ears with sufficient force to burst the target’s eardrums, making them permanently deafened (unless healed by a cure deafness, regenerate, or similar spell).

Peter Tork — The Monkey of Muting: This monkey is carved with its hands covering its mouth. When a command word is spoken, the monkey grows to the size of a capuchin monkey (about 2 feet high). Once a target has been indicated, the monkey blinks up to 30 feet away, reappearing with its tail wrapped about the target’s neck, allowing the victim to breathe but stopping all vocalizations. The target cannot speak, nor can he cast any spell that requires a verbal component. Additionally, the victim must make a Constitution save (DC 13). If the save fails, the monkey has crushed the victims larynx, making them permanently mute (unless healed by a regenerate or similar spell).

The monkey of muting may be removed in the same ways as the other monkeys.

If the owner wishes, Peter’s name can be spoken, causing the monkey to use its tail in a strangling attack. This attack automatically hits and causes 1d6 points strangulation damage per round. While attacking, the monkey may be removed in the same three ways described above, but its skin becomes as hard as amber, giving it AC 20. If the monkey succeeds in killing its opponent, it immediately crumbles into dust, useless.

Davy Jones — The Monkey of Halting: This monkey is carved with its hands covering its genitals. When a command word is spoken, the monkey grows to the size of a giant gorilla (about 12 feet high). Once a target has been indicated, the monkey blinks up to 30 feet away, reappearing with its arms wrapped around the victim’s torso. The victim is automatically Grappled and must make a Constitution save (DC 13). If the save fails, the victim instead gains the Paralyzed condition for as long as the monkey continues to hold onto them.

The monkey of halting is much stronger than the other monkeys, using the statistics for a Giant Ape (see Monster Manual pg. 323). The victim may escape from the monkey by killing it, dispelling it, or teleporting away, as described for the monkey of blinding above. Escaping the grapple requires a Strength (Athletics) or Dexterity (Acrobatics) check, opposed by the monkey’s strength check (the monkey has a +9 bonus on this check). 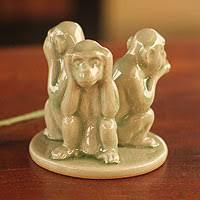