This belt consists of multiple interlocking copper chains, with a clasp in the shape of two large rats facing each other. In addition to the clinking of the chains, the belt occasionally emits a disconcerting squeaking, as if the rats that make up its clasp were alive.

Anyone wearing the Plague Rat Belt gains a +2 bonus on all saving throws against Poison or Disease. If the wearer grapples or wrestles with an opponent in close quarters while wearing the belt, the rats on its face will animate — clawing and biting. The rats automatically deal 1d4 points of damage to the wearer’s opponent each round, but also deal 1 point of damage to the wearer with their furious scratching. In addition, the opponent must make a save vs. death each round or contract a debilitating disease as per the Contagion spell. 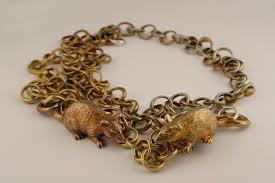