A short, smooth wooden staff, the head carved into a hand with an extended middle finger.

The pinnacle of orcish wit, this staff bears a head carved into the likeness of a hand with the middle finger extended. Crafted by Razbojk, the mother of the infamous bandit Noriss the Grey, this staff’s hand-motiff can likely be taken as a direct insult to the priest of Iyachtu Xvim (who have a clenched fist as their symbol), by the traditionalist priestess of Ilneval.

Razbojk’s Finger can be wielded in combat as a club, but gains no bonus to attack or damage rolls. It’s other powers, however, are both considerable, and prone to error in untrained hands. Rather than command words, this staff is controlled by gesture alone. Any time someone carrying the staff in hand rolls a natural 1 (on any d20 roll), he has accidentally moved the staff the wrong way, activating one of the staff’s abilities at random (roll 1d4 on the table below for effect, select the target at random).

Because it is controlled by gesture only, deliberately activating the staff’s powers carries no initiative modifier (instead of the normal +2 associated with activating a magic staff). Each activation (including accidental activations) consumes 1 charge from the staff. The staff has 5 charges which renew each day at midnight. 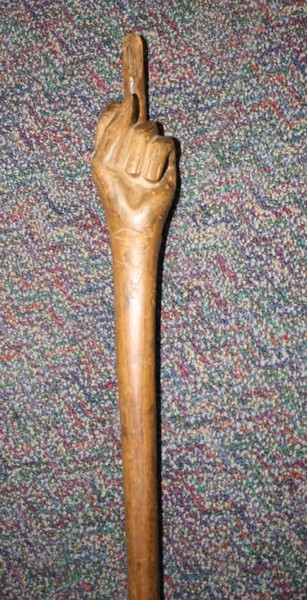