A black iron ring with a ram's skull and curling, golden horns.

A brother to the Ring of the Ram, the Ring of Baphomet is a black iron ring with a ram’s skull and curling, forked, golden horns. This ring was worn by a Goristro demon in the service of the armies of Baphomet that attacked Valjevo Castle during its first appearance in Hell, as a mark of servitude, tracking device, and means of keeping the behemoth siege-demon in control.

Baphomet is instantly and constantly aware of anyone wearing the ring, knowing their precise location in the planes. This location ability cannot be blocked by any magic short of a wish or direct divine intervention (even mind blank will not protect against this). In addition, the ring’s wearer suffers disadvantage on all Wisdom and Charisma saves against spells or attacks used by demons.

While worn, the Ring of Baphomet grants the user a +2 bonus to his Strength score (this can raise the user’s Strength above 20) and advantage on all Charisma (Intimidation) skill checks. In addition, if worn with a Ring of the Ram the Ring of Baphomet augments the abilities of that item in the following ways:

The ring will resize to fit any wearer. 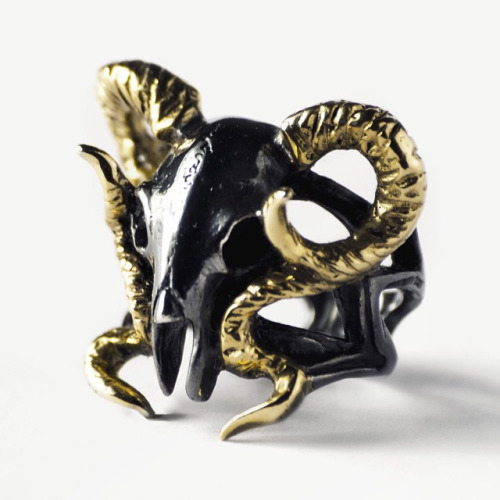