A bronze ring, deep green with patina, set with a rhomboid-cut bloodstone.

This bronze ring, deep green with patina, set with a rhomboid-cut bloodstone, was purchased from the Magic and Curios Shop of Hillsfar. The shop’s proprietor would reveal nothing of the ring’s history, but was explicit about its considerable powers.

The ring of regeneration restores 1 point of damage each turn (every ten minutes). It will eventually replace lost limbs and organs (at the rate of 1 cubic inch per hour) and will bring its wearer back from death. If death was caused by poison, however, a saving throw must be successfully rolled or the wearer dies again from the poison still in his system. Only total destruction of all living tissue by fire, acid, or similar means will prevent regeneration. Of course, the ring’s removal stops the regeneration processes.

The ring takes effect immediately when donned, but can only regenerate damage that was inflicted while the ring is worn. It cannot be placed on a body after the fact to restore life and limb. 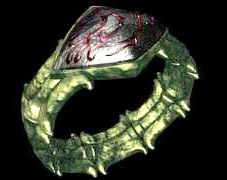