A plain silver band, etched with a series of holes.

This wide sterling silver ring uses engraved lines and holes to create a simple yet striking cosmic pattern, reminiscent of the constellation known as the Double Daggers. It was found amidst the treasures belonging to Ssavath, king of the Three Towers lizardman tribe, after his kingship was passed to SSsslaasshh. Like most treasures of the tribe, it is believed to be of Kur-Tharsu origin, but its provenance has not been proven.

The Ring of Shifting Stars changes its size to fit the left pinky finger of any being that holds it (it will never fit correctly on any other digit). It grants its wearer a +1 bonus to his Reason score as long as the ring is worn.

Any Wizard (or Bard, or similar arcane caster) wearing this ring is able to “hang” a single spell on the Double Daggers constellation as if he were an Astrologer whenever he prepares his spells. This hung spell takes 50% longer than normal to prepare, but does not count against the caster’s normal limit of spell’s each day. Once hung, the spell remains available until it is cast (possibly for months), after which a new spell must be prepared.

As long as the astrologer can see the constellation (which only appears during the months of Marpenoth, Uktar, and Nightal), the caster can trigger that spell. A hung spell can be called forth at a moment’s notice, with an effective casting time of 0. No more than one spell may be hung on a constellation at a time. Obviously, the hung spell is not accessible at all underground, during the daylight hours, or when the sky is overcast. 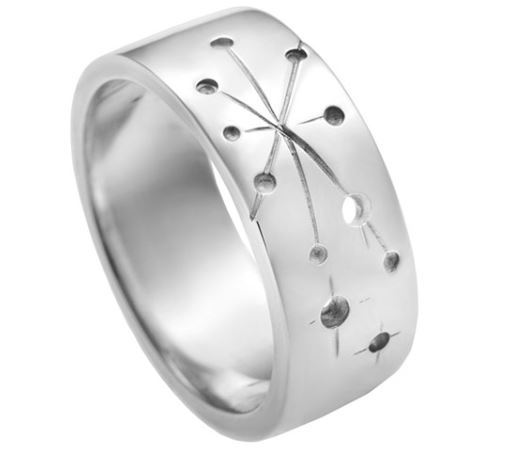