This breast plate is made from pieces of the shell of a Flail Snail. It functions as a normal breastplate, but may be worn by Druids and other characters forbidden the use of metal armaments.

In addition, by making a successful Willpower check, the wearer can cause the armor to become a shifting pattern of incredible hues, color after color cascading across its surface in sparkling rainbows of dazzling light. Activating the scintillating colours consumes the wearer’s action for a round. After the initial round of activation, the wearer is able to cast spells, attack, or engage in all forms of activity that do not require movement of more than 10 feet from his starting position.

This effect sheds light in a 40-foot diameter sphere, and it has the power to hypnotize anyone in the area of effect, making them unable to attack the wearer. A full round passes before the colors begin "flowing’’ on the armor. Starting the round after the colours are activated and each round after that, anyone within the area who fails a saving throw vs. spell will stand hypnotized and transfixed for 1d4+1 rounds. Even when this effect wears off, additional saves must be made in order to attack the wearer of the armor (other targets may be attacked normally).

Furthermore, every round of continuous scintillation of the armor makes the wearer more difficult to hit with both melee and missile attacks, gaining a cumulative +1 bonus to AC each round; to a maximum bonus of +5 after five continuous rounds of the dazzling play of hues. This stacks with the mundane protective qualities of the armor. 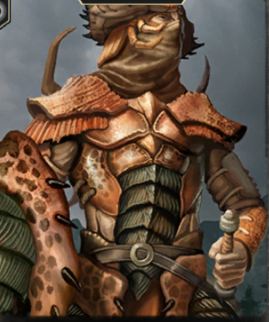