A massive, leather-wrapped, wooden mallet that changes size to match anyone who touches the handle.

This hammer was crafted by the giant truenamer Sorrassar to aid in those mundane tasks for which his magic seemed excessive, ranging from hand-to-hand combat, to construction, to regular, minor repairs of his gear. He had the hammer specially made by a human craftsman from durable materials, then enchanted it to grow to match his own size and strength. This massive bludgeon weighs is more than three feet long and weighs more than ten pounds when at rest. The head is a block of white oak, spiked onto an iron handle wrapped in braided leather strips made from rothé hide. The hammer is extremely durable, and, despite its wooden head can be used for any task that a solid steel hammer of its size could be expected to perform.

When the handle is touched by any sentient creature, the hammer immediately resizes to fit that creature’s grip, shrinking down to as small as a common claw-hammer in the hands of a halfling, or growing to as much as three-hundred pounds in the hands of one of the taller giants. If two or more creatures of differing sizes touch the hammer’s handle at the same time (such as a man attempting to steal it from a giant), the touching creatures must make opposed Charisma checks (once per round in the case of prolonged contact), with the hammer matching the size of the winner.

When wielded in combat it functions as a maul of a size appropriate to the user, and counts as a magical weapon for determining what creatures can be hit by it. On a critical hit, the hammer has an instantaneous increase in mass. The force of the blow from any critical hit sends the target flying 5 feet away from the wielder for every 1 point of damage dealt by the blow, where they land prone. If the target encounters a solid surface, they suffer an additional 1d4 points of damage for every 5 feet of movement left. The barrier suffers similar damage—which means in enclosed spaces the target is likely to end up landing just on the other side of a shattered wall.

In addition to its formidable combat abilities, the hammer aids in all manner of mundane craftwork, from smithing, to carpentry, to rock-breaking. When used for any mundane task, the hammer lends additional strength and endurance to the wielder’s arm, allowing him to work for twice as long before tiring. So long as he does nothing else save sleeping and eating, the wielder can work for up to sixteen hours strait, accomplishing two days worth of work in a single day. 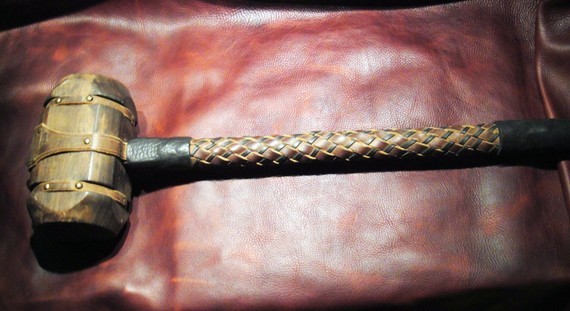