A small wooden whistle with a childlike carving of a bird seated on one end.

This small and lightweight wooden whistle was found in the lair of the witch-doctor of the “Squatters in Onyx” kobold tribe. Lazily carved, the instrument features a single finger hole to alter its pitch. A childlike carving of a bird has been hewn heavy-handedly into the whistle’s foot and covered in garish yellow and blue pains.

When putting the reed to your lips and forcing a small puff of air through it, a tuneless squawk sets everyone on edge. It takes a few moments before you hear the distinct flapping of birds approaching.

The sparrow’s whistle is infused with the underwhelming ability to summon three or four small birds. The birds can be given a simple command involving a single action—including attacking something. They can transport a lightweight object several dozen feet before the spell wears off, whereupon the birds simply drop their charge and fly away. Asking the birds to accomplish anything beyond a single action (more than one verb) results in avian calamity. The whistle does not grant the birds any power or ability beyond what they would have normally. Commanding three sparrows to attack the goblin patrol creates a scenario precisely like three sparrows attacking a goblin patrol. On the upside, the bird’s song is easier on the ears than the whistle…

The whistle’s magic can be used once per day. 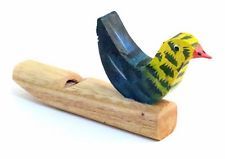