This staff looks like a plain, broken tree-branch, with most of the bark removed.

This plain-looking but powerful item was purchased from the Magic and Curios Shop of Hillsfar.

If a dormant staff is used to successfully strike an elemental, the creature must immediately attempt a save vs. staff. If the save fails, the elemental is absorbed into the staff, thereby recharging the device. If the roll is successful, the creature avoids the effect, but suffers normal damage from the strike of the magical staff. It is possible to absorb an elemental only if the staff is dormant. Only one elemental may be held in the staff at one time.

The staff holds the following powers that do not drain charges. Each may be used once per day even if the staff does not hold an elemental:

An occupied staff has the following powers depending upon the type of elemental trapped within. For example, if a fire elemental is held in the staff, only those powers related to fire are available.

Using a staff of the elements can be dangerous. Each time a power is used that requires the expenditure of one or more charges there is a 5% chance that the trapped elemental bursts forth, destroying the staff in the process. A successful dispel magic spell cast on the staff automatically releases the creature (without harming the staff). An escaped elemental will certainly seek revenge against its tormenter. 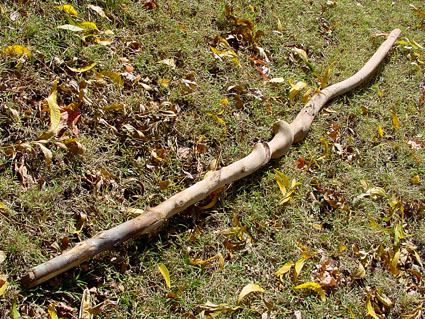