This beautiful Khopesh has an ornate gold-plated handle and a gold-inlaid fuller along the blade. Any creature that touches the blade is telepathically informed that the blade bears a Gaes, albeit one that must be accepted willingly.

The gaes requires that the wielder must “never kill or willingly harm any feline creature, nor suffer others to do so”. In the hands of a bearer that rejects the gaes, the sword functions as a normal, non-magical Khopesh.

For those that accept the gaes, the Sword of Bast functions as a +2 magical Khopesh. In addition, no cat will ever harm the wielder, and domestic felines will always react to the wielder in a friendly manner.

If the wielder is also a worshipper of Bastet, the sword grants the wielder the ability to Move Silently with a 99% chance of success, and to speak with all feline creatures. 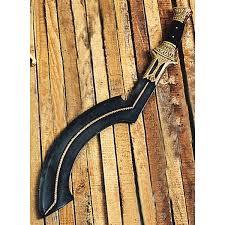