A longsword with a scalloped, bronze pommel and a plain blade, polished to a mirror-bright finish.

The Sword of Halfrek is a longsword with a scalloped, bronze pommel and a plain blade, polished to a mirror-bright finish. The name of Halfrek is inscribed on the narrow cross-guard in gothic script.

This sword exhibits no magical properties or enhancements under normal use, and gains no bonus on attack or damage rolls. It is treated as a normal, steel weapon for determining what creatures can be harmed with it.

Any creature slain by the Sword of Halfrek has its soul, and physical form trapped in the blade at the moment of death, similar to a Trap the Soul spell (no save, but magic resistance applies). Any items carried by the creature fall to the ground where it stood. While trapped, an image of the creature can be seen in the blade if the blade is closely inspected. The sword feeds on the trapped spirit’s remaining life force, and grants the wielder the ability to tap into that creature’s knowledge and power.

While a spirit is trapped within the blade, the wielder of the sword can use each of that creature’s skills, proficiencies, or abilities once, so long as the Sword of Halfrek is in hand. The wielder gains no numeric abilities of the creature (hit points, AC, ability scores, etc.), abilities related to gross physical qualities (wings, gills, etc.), or weapon proficiencies of the creature, but can use any other ability that the creature possessed at the time it was slain—including memorized spells, spell-like abilities, class abilities, natural immunities, and non-weapon proficiencies. Each such ability can be used exactly once, after which time it is lost (the GM should compile a list of abilities for each creature slain this way and give it to the wielder).

Once the last ability of a given spirit is used, that spirit is completely consumed. It’s image disappears from the blade, its body is unrecoverable, and the being cannot be raised or resurrected by any means short of a Wish or direct divine intervention.

Only one such creature can be trapped by the blade at any time. If a new creature is slain before the one in the blade is entirely consumed, the new creature is absorbed and the (dead) body of the previous creature appears next to where the newly fallen vanished. Similarly, a Wish, Freedom, or similar spell will release a trapped body, as does the destruction of the sword. A being released in this way can be raised or resurrected normally.

The Sword of Halfrek is the result of a poorly worded wish by a young girl seeking a way to keep her dying father, once a great swordsman, from passing into the afterlife and parting from her. As the wish was spoken, her father’s sword rose into the air and plunged itself into the old man’s heart, causing him to vanish into the blade. The girl took up the sword and found that she was able to see her father within the weapon. The girl kept the blade with her throughout her life, and found that she was able to fight with much of her father’s past skill, as if guided by his hand, but that after each battle her father’s presence grew weaker, and so the blade was used only in the direst of circumstances. Eventually, though, the memory of her father faded from the weapon, leaving her distraught. In her misery, the girl was ambushed by a thief and killed with her own sword, becoming the second soul to live within the weapon.

Since then, the Sword of Halfrek has passed through many hands, often through treachery, and the majority of the sword’s owners have found themselves as residents of its steely prison. The sword’s most recent owner was the father of Karistos Mondaviak, Chalkis Mondaviak, who obtained it after a duel with a fellow nobleman in Old Phlan. Chalkis, fearing the sword’s powers, hid it away in Kryptgarten Keep, one of the family’s minor holdings on the edge of the forest north-west of Phlan.

“Gaulguth, the Evil Eye” — reflects the image of a massive humanoid demon, its corpulent body covered with bony spikes. It squats on a pair of large, frog-like legs, and three arms are arrayed equidistantly around its flabby torso. Its head sports a single large cyclopean eye, a long filthy beard, and a pair of large curling ram’s horns. 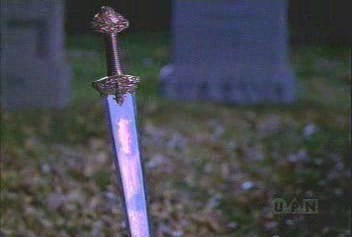