Standing nearly 6 feet tall and 4 feet wide at its widest point, and made from solid gold; this massive triangular shield is clearly not intended to be wielded by a man. Were it not for the similarly over-large straps on the back, and its powerful enchantments, one might be lead to believe the shield was made purely as an ornament, to be hung on a wall.

Tae Ew or “The Ogre Shield”, as it is sometimes called, is made of solid gold. The flat surface of the shield has been deliberately sulfur-tarnished to give the impression of eight golden dragon heads in relief; with six more smaller dragon heads along the upper margin. A ladder-worked bose of gold-alloyed Corinthian bronze has been mounted along the center to reinforce the soft-metal shield for combat use.

In combat, Tae Ew functions as a +2 tower shield, granting the bearer a +4 bonus to his armor class and a +2 bonus on saving throws against all frontal attacks. Due to its extreme size and weight, the shield must be carried in two hands unless the wielder is a Large-sized creature or has a Muscle score of 17 or greater. 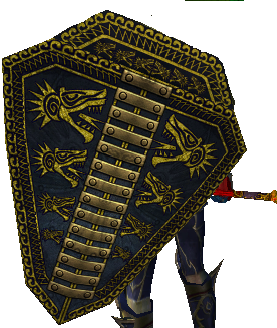