Despite its appearance, this old longsword is actually a powerful magical weapon, granting a +2 bonus on attack and damage rolls. This power is a mixed-blessing however.

If drawn and wielded in the heat of battle, the Berserking Blade causes its wielder to enter a state of uncontrollable fury, attacking the nearest creature and fighting until dead or no living creature is within 60 feet, with no ability to distinguish friend from foe.

Once combat has engaged, the wielder cannot be disarmed, drop the sword, sheath the sword, change weapons, or otherwise relinquish it without a remove curse or similar magic. Once the rage passes, the wielder is free to stow the sword however he wishes. Likewise, the sword’s owner is by no means compelled to use it. 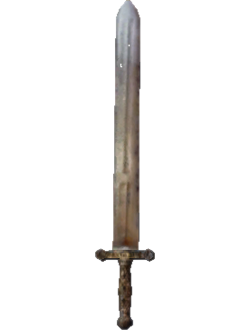