The Deck of VERY Many Things

This standard deck of playing cards (54 cards, including 2 Jokers) looks perfectly normal, but radiates very powerful magic, and resists all attempts to identify it. When used in normal games, the deck behaves just as any non-magical deck of cards.

The enchantments on the deck can only be activated by one willing to activate them. To do this all 54 cards must be shuffled and then a single (1) card drawn from the top of the deck. If done under duress, this takes about as much time as casting a spell, incurring a +3 modifier to initiative. Drawing a card in this way is surprisingly taxing, causing the person drawing the card to immediately lose 1/4 of his maximum Fatigue points.

Other than the exhaustion drawing a card causes, there is no limit to how often a card can be drawn. Each time the deck is activated, all 54 cards must be returned to the deck and shuffled.

If a card is drawn in a place which does not follow a standard solar time-scale, Draw a Card then roll 1d4 to randomly determine the time that the Deck thinks it is.

The Deck of VERY Many Things 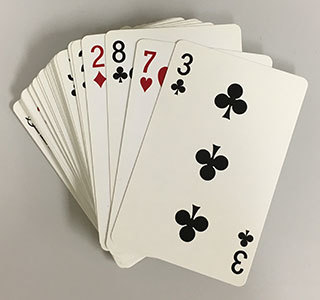