A gleaming battle-axe, in perfect, mint condition, as if it were fresh from the forge.

This gleaming battle-axe always appears to be in perfect, mint condition, as if it were fresh from the forge. It never shows the slightest hint of dirt, grime, blood-stains, rust, or wear, and even the most disgustingly sticky substances seem repelled by the blade. This particular weapon was found, clean and shiny as always, on the body of a dead adventurer, in a heap of refuse and offal, in some Xvart caverns west of Phlan.

The Immaculate Axe radiates a strong aura of abjuration magic. The axe is unaffected by any attempts to damage or soil it—neither rust, nor hammer, nor acid, nor fire can mar the weapon’s appearance. Spells such as disintegrate can destroy the axe, but regular wear or damage (even from a magical source) cannot. This protection does not extend to damage inflicted by spells of greater than 9th level, weapons or items of artifact-level power, or attacks by divine beings.

Likewise the axe repels all adhesive substances. Even supernatural substances such as a grease spell, the touch of an adherer or mimic, or the sovereign glue will not stick to the axe.

When wielded in combat, the Immaculate Axe functions as a normal battle-axe, though it counts as a magical weapon for determining what creatures can be harmed by it. In addition, the Immaculate Axe deals an additional die of damage (increasing the base damage from 1d8 to 2d8) when used against creatures that are unnaturally filthy, slimy, sticky, or disgusting (including oozes, slimes, aboleths, skum, adherers, otyughs, and other creatures subject to DM interpretation), as the blade actively repels their filth, thus cleaving them all the more. 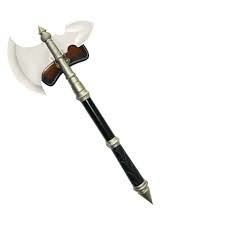