The Shield of Charms

A two-foot-tall escutcheon shield of solid bronze, painted with a brightly-colored songbird with outspread wings.

A two-foot-tall escutcheon shield of solid bronze, with relief of a songbird with outspread wings, the negative relief deliberately patinated to make the bronze bird stand out.

When worn or touched, the wings of the bird appear to flap gently. The shield functions as a +1 medium shield. The wearer character can defend against any number of frontal or flanking attacks in a given round, applying a +3 armor class bonus to his overall armor class rating, providing he remembers to disregard the shield bonus during the occasional attack from the rear.

When the user is hit by an opponent in melee, the opponent must make a saving throw vs. spell or become charmed by the user of this special shield (as the wizard spell charm monster). If a weapon is used in the attack, the opponent gains a +4 bonus to the saving throw (enemies striking with unarmed attacks or natural weapons save without the bonus). Only one victim can be charmed each day, but any number of saving throws may be made before the charm is successful.

The Shield of Charms 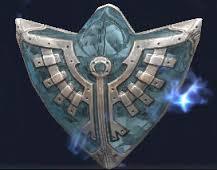