A single light blue square of silk cloth. Folded carefully to display the emblem of its former owner, the cloth appears to be slightly damp. Unfolding the square makes it apparent that the cloth is cut in the shape of a handkerchief. The cause of the handkerchief’s continued dampness is not obvious.

After suffering a series of tremendous losses, a wealthy baron grew tired of drying his tears with damp handkerchiefs. The baron commissioned the renowned Jastrix the Attemptor to create an enchanted cloth that could absorb the baron’s many sorrows. The enchanter made several unsuccessful attempts before being removed from the baron’s court. The weeping handkerchief is one of Jastrix’s failures.

Rather than being eternally dry and absorbent, the small square of fine silk is forever wet. Just shy of dripping, the object cannot be dried by any mundane means. As an action, a character can make a Dexterity or Strength check1 to wring out the cloth to produce one cup of potable water. The cloth can produce a total of four cups of liquid per day in this manner. The moisture from the handkerchief does not transfer to other surfaces, and so it can be stored without fear of soaking other items. 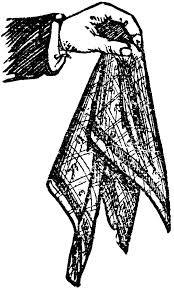