This bronze-bladed khopesh, a sword common in the far southern lands of Mulhorand, takes its odd and simple name from its most recent owner, the halfling champion Tomothy Townsend. Both this distinctive weapon, with its double blood-groove, and its owner are well-known in the city of Phlan, particularly in the Slums where Tomothy was well respected as a defender of many a maiden’s honor against local orcs and ruffians, despite his diminutive size.

While the bronze blade of this sword requires regular sharpening and maintenance, it is still quite useful. In combat Townsend functions as a +1 magical khopesh. Unknown to many northerners, bronze is favored in the undead-plagued south for its efficacy against animate corpses. Any strike against a corporeal undead creature forces the creature to make a saving throw versus rods or be stunned for 1 round. 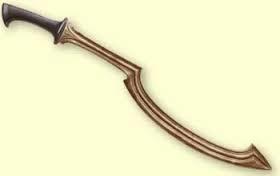