An ornate bronze breastplate with form-fitted breasts and cobras mounted on the shoulders.

According to the Shumbha myth of Aglarond, the Alu-fiends appear as feminine powers from the bodies of the demon lords. The stories say that Varahi was created from Varaha, demon lord of Boars. According to a latter episode, the succubus Durha mothered the Alu-fiends herself and led eight Alu in battle against Raktabi, lord of the 721st layer of the Abyss, slaughtering his armies with their help. When the demon Shumbha challenges Durha to single combat, she absorbs the Alu into herself. After the battles described in the myth, the Alu sprang from their mother’s back and danced–drunk on their victim’s blood. In Aglarondan demon-lord, Varahi is depicted riding on Shesha (the demon queen of the spirit nagas), and is said to represent the vice of envy.

The Markendeya from Thay praises Varahi as a granter of boons and the regent of the northern direction, in a hymn where the Alu-fiends are declared as the protectors of the directions. In another instance in the same book, she is described as riding a buffalo. In the Thayan retelling of the Raktabija episode, Varahi is described as having a boar form, fighting the devils of the Blood War with her tusks while seated on a corpse.

Whether any of these myths are true, or are at all related to the demoness named Varahi who assaulted Valjevo Castle on its arrival in Baator is purely a matter of speculation. The powers of her strange breastplate are not, however.

Specially made for the alu-fiend ‘Varahi’, this armor gives new meaning to the term breastplate. The armor is a bronze breastplate, the chestpiece carefully sculpted to Varahi’s chest. Between the breasts two adders coil up from the sternum, their heads protruding over the shoulders, flanking the wearer’s head. The armor will not resize, and will only comfortably fit female humanoids of 5 to 5 and a half feet in height, with slight builds and rather copious bosoms (though the latter could be padded).

The breastplate functions as a normal breastplate, but grants greater protection (AC 15 + Dex modifier). When the wearer is struck in combat, she can command the snakes to animate and strike at her attacker. As a reaction, the snakes will make two attacks against a creature that has struck the wearer. The attacks are made using the wearer’s proficiency bonus and Dexterity modifier, and deal 1 point of magical piercing damage. On a successful attack from one of the snakes, the target must make a Constitution save (DC 11) or become charmed (if male) or frightened (if female). This condition lasts until the end of the target’s next turn. 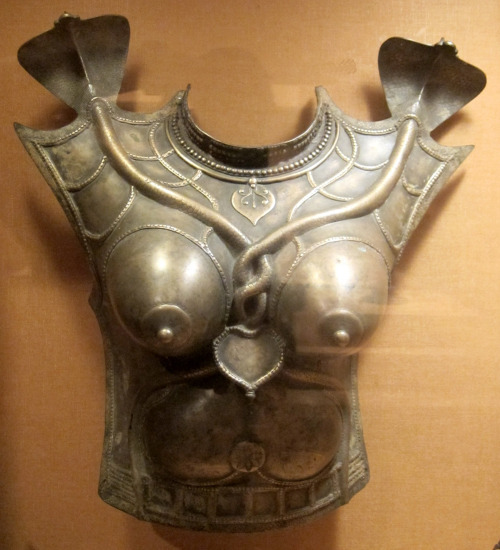